Photographer Burton Frasher (1888-1955) combined a passion for automobile travel and photography into a postcard business that proved popular with motoring tourists. Frasher documented the remote Route 66 roadside businesses that sustained, and natural wonders that awed, anxious travelers across the Mojave Desert in the 1930s and 1940s. This selection of photographic postcards focus on the desert wayside stops and scenic vistas that motorists rushed through on the last leg of their journey west.
(Curated by Chris Ervin)

JOSHUA TREES BLOOM ACROSS THE MOJAVE

This spring has witnessed a profuse and wide spread blooming of Joshua trees and Mojave yuccas across the Southwest. Here is a sampling from the numerous reports in the media:

Despite this winter and spring being relatively dry, the Joshua Trees found in the Mojave Desert and on the eastern slopes of the Tehachapi Mountains are blooming now, in the understated, non-colorful way that Joshuas flower. Like so many aspects of this distinctive plant, the Joshua Tree flowering is unusual and seems to defy the long odds against ever successfully producing new Joshua seedlings.

If you are looking for wildflowers this spring you’re in trouble. On the other hand this is one of the best years for Joshua trees in bloom. This past week, scattered across the Mojave Desert, Joshua trees everywhere were blooming in profusion. From Joshua Tree National Park to Red Rock Canyon State Park in the western Mojave Desert and from Walker Pass just east of Lake Isabella to Utah and Arizona, Joshua trees were in bloom. On Cima Dome, in the Mojave National Preserve, it is the best Joshua tree bloom in 25 years.

The Mojave Desert’s iconic Joshua trees are blooming like crazy and, although theories abound, there is little consensus about why it’s happening. From Joshua Tree National Park and into Nevada and Arizona, millions of the trees bear foot-long conical bundles of tightly packed, greenish-white flowers at the ends of their spiky branches. What’s remarkable this year, experts say, is that just about every tree has bloomed or is flowering now, with fragrant bundles at the tips of just about every branch. Biologists and others said they can’t recall a year when the Joshua trees had more abundant flowers.

Millions of the trees have been bursting into bundles of greenish-white flowers in California, Arizona, Nevada and Utah. Just about every tree has bloomed this spring when usually far fewer do and they produce fewer flowers, biologists said. "This is a once-in-a-lifetime phenomenon," Cameron Barrows, a research ecologist with the University of California, Riverside.

Desert ecologist Jim Cornett has been studying Joshua trees since 1988, and he has never seen them bloom the way they are this year. The trees have been blossoming profusely throughout their range from Joshua Tree National Park to Tonopah, Nev., and Wickenburg, Ariz., sprouting abundant cream-colored flowers from the tips of their branches.

Bridget (Sandoz) Wilcox of Yucca Valley donated the truck she inherited from John Riley Bembry when he died in 1984. Riley used the 1934 1 1/2-ton Chevrolet flatbed pickup to travel between his many mining claims in the Ivanpah Mountains and his nearby home known as Riley's Camp.

MDHCA director Dave Taylor inspected the truck stored in Hinkley, reported it was in excellent condition, and made arrangements for transporting it to Goffs. Dave and his friend Mike Pike loaded the truck on a double-axle trailer and arrived in Goffs this same day. Riley's truck has been appropriately placed between the Stotts and American Boy stamp mills here on the grounds of the Goffs Cultural Center for all to admire.

You can read the entire article on Riley and the truck retrieval in the East Mojave Heritage section of the latest Mojave Road Report number 292.

CHANGE OF COMMAND CEREMONY AT GOFFS

Outgoing remarks of encouragement were then made by Dennis Casebier followed by some from Hugh Brown about the MDHCA's future. Honorary plaques were presented by Mr. Brown on behalf of the MDHCA to both Jo Ann Casebier (left) and to Dennis in recognition and appreciation of their strong efforts and guidance over many years to ensure the MDHCA exists in perpetuity.

12 October 2012. The 33rd Annual Mojave Road Rendezvous was the occasion for the unveiling of two new updated logos for the Mojave Desert Heritage and Cultural Association. MDHCA President Steve Mongrain led the execution of this effort and thus ensured that they would be available to the membership in the form of decals in time for the Rendezvous. Here is the text of Steve's presentation to the gathered audience:

Earlier this year, Dennis recommended that the Board of Directors develop a logo with a motto for the Mojave Desert Heritage and Cultural Association, what marketing types would call a “brand,” a picture that depicts who we are and what we are about. Here’s what we came up with.
The one above will be used for more formal needs; letterhead, envelopes, formal letters, items where we wish to express the historical aspects of the Goffs Cultural Center. 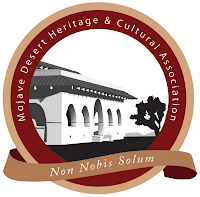 The second one here on the left will be used for more informal items; caps, decals, shirts. The creative folks tell me the maroon color has a close resemblance to red/brown associated with the color of the Earth, the beige with the sand of the desert itself.
The Joshua Tree symbolizes the Mojave Desert, what causes us all to be here. It symbolizes the Mojave Road, the East Mojave Heritage Trail, and the numerous historical sites throughout the East Mojave, our “boots on the ground” work.
The rendering of the Schoolhouse symbolizes our major goal, the preservation of the history and culture of the Mojave Desert and surrounding area. It speaks to the Mojave Desert Archives and the 19 collections housed here, the more than 120,000 historical photographs, the 6,000+ volumes, 5,000 maps, more than 700 oral and transcribed interviews, and numerous manuscripts, periodicals, pamphlets, digital databases, etc. And it speaks to the Dennis G. Casebier Library on the north side of the campus that houses much of this data. It further represents the Goffs Cultural Center campus, and all the wonderful historic antiquities on the grounds here.
The Latin phrase, Non Nobis Solum, was requested specifically by Dennis. Some years ago, a group of us were meeting at the Casebier residence across the way here. We were discussing then, as we continue to discuss today, PRESENCE here at the Goffs Cultural Center. You may have read in either the Goffsgram or Mojave Road Report that we are often in need of people to be here, generally at least four or more people all the time as this place is far too important to leave unattended at any time.
Anyway, someone at the meeting mentioned to Dennis that most people don’t have the passion he does regarding the MDHCA, and therefore not to expect lots of volunteers. I will always recall Dennis’ answer. He said that he didn't expect lots of volunteers because he had learned over the years that committed people show up “one person at a time.”
Dennis remarked that “many people have no passion for anything, and therefore why not be part of a movement far greater than just yourself? Why not pitch in and help an organization that records the history of Americans in the Mojave Desert for the benefit of generations to come? Do a little, or do a lot, but jump in. Give back and participate.”
Those were important words, and hence our motto, Non Nobis Solum, which translated means, “NOT FOR OURSELVES ALONE.” A special note of thanks goes to fellow Board member John Fickewirth and his associate, Jim Earley, for their design assistance.

Over the course of one month the construction crew got the building up. Starting the week of March 5, they worked on the intricate framing needed for the concrete base of the metal building.

On March 9, two work crews received two concrete trucks laden with 10 yards of concrete to pour the metal building slab. By March 29 the building was completed.